As a protocol we need to look at ways to increase the usefulness / demand of veFXS tokens so i have started this thread so people can share their ideas on how we can do this with the idea of putting up a proposal once a few good ideas have been discussed.

I would like to propose the idea of rewarding locked veFXS holders with extra rewards once the FRAX market cap reaches set target.

When the USDC- FRAX pair was added to the gauge we voted for some of the rewards that where issued to the USDC-FRAX v2 stakers to be re-directed to the protocols treasury, so i propose some of these funds are used to pay for these extra target based rewards.

i propose that at each level we reward the veFXS holder with 5-10% of the treasury FXS holdings.

the rewards should be paid out over a 3 month time frame and only paid to locked veFXS holders.

this will result in veFXS holders having the same risk as before, but will now have more rewards if the FRAX protocol grows to become a much bigger project. so from an investors point of view veFXS will have a better risk / reward (imo).

i should disclose that i am a veFXS holder but it is only around 4.5% of my total investment in the FRAX protocol.

i had another idea …

right now the AMO’s make profit and use 25% of the profit to buy FXS on the open market to reward veFXS holders.

what if we change it so it uses 25% to buy FXS from the treasury (at current market price) rather then the open market?

this would mean the treasury now has more (non-FXS) funds to use in its profit making operations and it would help these funds compound and make bigger profits over time.

the down side would be slightly less buying on the open market.

the up side would be more funds for the protocol to use in its profit making operations.

First of all, this is a great thread to get ideas going. It seems similar to my veFXS perks/features thread but I guess we can have two threads to discuss it.

I am intrigued by your idea of buying FXS from the treasury with the AMO profits. It sounds like it is in effect just another way of holding profits on the balance sheet but in a more elegant manner. I would back this idea since it keeps value in the protocol overall. If you intended it in a different way, then I might have misunderstood.

the idea about buying FXS from the treasury rather then the open market is for a few things.

1, the treasury can exchange FXS for other stables and can use the stables for profit making in other areas

2, imo the treasury will have more options open for making profits if it holds more stable coins.

3, the FXS thats removed from the treasury will be going direct to locked FXS holders that are likely to lock the funds or leave them unclaimed for some time.

lets put up a vote and see what happens

Just to be explicit: keeping the existing system but adding that the treasury will start regularly selling some of its FXS is exactly equivalent to using AMO profits to buy from the treasury instead of on the open market. Removing buying pressure == increasing selling pressure.

What I think might be interesting is saving some of the AMO profits in the treasury. Saving here means using AMO profits to buy assets on the open market and depositing them in the treasury. What is saved could be any number of different assets including stablecoins which then could be invested. I’m not 100% sure if I’d support this either as there’s obviously the tradeoff of decreased rewards for users/stakers but this would at least grow the protocol balance sheet while the suggested option would not.

having FXS in the treasury does very little, it does not earn any profits for the protocol, so (imo) exchanging it for a profit making asset would help increase the total value of the FRAX ecosystem and in time , increase the value of FXS.

i also see a big difference between selling FXS on the open market and rewarding that FXS to investors that have already locked FXS and invested their own money in to the protocol.

when FRAX protocol started there was no plans for the treasury to hold FXS.

we are already saving / compounding some of the protocols earnings.

There’s no economic difference between keeping the existing system where AMO profits are used to buy and distribute rewards plus adding open market treasury sells and having the AMO buy directly from the treasury. It’s fairly simple to write out a proof for this, just keep track of how funds move in each scenario and you’ll see the outcome in both cases is exactly the same.

The only meaningful difference between the 2 is the first case would have some market volatility from the open market operations and the second case would not. This is why I agree if we were going to pursue treasury sells I think doing it via purchases from AMO profits would probably be a good way to do it, I just don’t think we should do it.

I’m not going to write a really long post but think this has pretty obvious downsides. The most obvious is it would put downward pressure on the FXS price. Beyond that though it also just seems to be an improper use of the treasury. I’m all for thinking outside the box and trying new things but I think it’s a little strange to just start selling the treasury’s FXS for other assets with no clear goal except to try to earn yield on the received funds. It’s also not great signaling, it’s as if Frax itself doesn’t believe the price of FXS is going to appreciate in the future.

there are no reward earning FXS staking options that the protocol can use to earn anything with the FXS it holds.

i would rather use the value of this FXS to help grow the protocol and increase the protocols earnings.

There’s no economic difference between keeping the existing system where AMO profits are used to buy and distribute rewards plus adding open market treasury sells and having the AMO buy directly from the treasury. It’s fairly simple to write out a proof for this, just keep track of how funds move in each scenario and you’ll see the outcome in both cases is exactly the same

This is just an argument that the treasury would earn a higher return if it held stablecoins it could invest instead of FXS. This very well might be true. I’m not arguing your proposal couldn’t result in higher returns for the AMOs, I’m arguing it’s equivalent to the treasury selling it’s FXS for stablecoins which I maintain it is.

There’s more I could say but I’m not sure if it’s worth continuing this debate or not. If this proposal starts attracting larger interest from the community maybe we can get into it more.

Im not trying to have an argument, im just trying to increase protocol earnings and in turn increase staking rewards and the treasury holdings.

i see no advantage to holding FXS in the treasury and feel this is wasted value that could be used for something more productive.

I was using the word argument in the sense that you were putting forth an argument not that you were being argumentative. I know you’re just trying to advocate for what you think is best for the protocol and understand your point of view. I disagree with it, but at the end of the day we are all on the same team here, nothing wrong with a bit of debate

ok so it seems voters agree with not releasing FXS from the treasury … so, if thats the case then we need to find a way to make the FXS in the treasury earn its keep so i have a 2nd proposal.

how about we stake the treasury held FXS in to TOKE and start earning rewards for our FXS.

the down side is we are putting our FXS at risk and the % apr return for TOKE pools will drop.

ok so after speaking about this a bit in the telegram i have gathered the main points form the people voting against.

the things they dont seem to agree with is,

1, using protocol funds would reduce the APR% for other investors in toke
2, protocol owned FXS is for building and not for investing
3, earning and selling TOKE would look bad and give us bad PR.

this is all a bit confusing to me because we are already doing these things.

1, we used protocol funds for ETH liquidity and investors in the ETH pool saw their APR got to near 0% , we did the same with the BSC pool on IF.

2, we have used protocol owned FXS to pay bribes for increased return on investments for the protocol and other investors.

3, we have earned and sold other governance/reward tokens as part of our investments in other protocols.

all the things we have done in the past have worked really well for the protocol and have made good returns.

one thing that did come up was the idea of putting a cap on the total % of the TOKE pool that the protocol should own and a range of around 10-25% was seen as ideal, so maybe this is something which would make this proposal more attractive. as the proposal does not state an amount of FXS to be invested i see no issue with capping the total investment withing this range if it passes. and we can let the team choose an amount in that range that is ideal to invest. 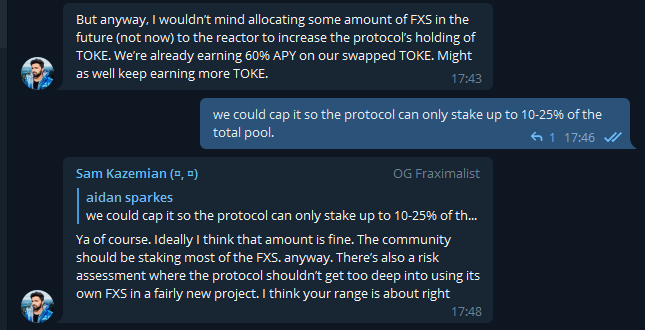 it seems some team members agree with the idea of investing some FXS in to toke at some point, so maybe they will choose to invest a very small amount now but this vote will give them permission to slowly ramp that up as they see fit at a later date.

maybe its just a bit to early with this one.