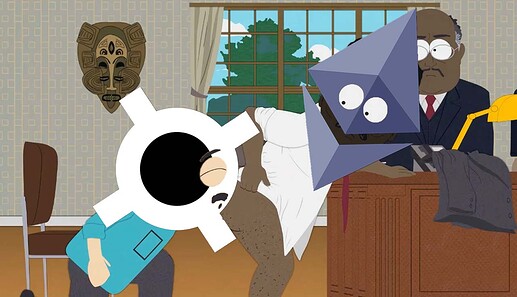 I posted a pair of FIPs that are meant to formalize the position of the FRAX community and FRAX protocol regarding the dreaded “decentralization” word.

There are a lot of people who look at FRAX and get stuck at:

1st. centralized. The dreaded word in crypto. (FIP-8 “solves” this)

I don’t know if you guys noticed, but L1 ideology and L2 ideology (BSC, MATICPOLYGON, AVAX, Arbitrum? Optimism? zkSync? StarkWare? etc. etc.) is very different. FRAX has already established itself as L1 native so I’m assuming it has to play by the values found on L1 ETH.

One of the core tenets of ETH is decentralization. One would say it’s enshrined in the ‘constitution triangle trilemma thing’. I am in no way saying FRAX is not adopting this mantra, however, I AM saying it is definitely not SEEN as adopting it by its partners. They think we are not doing enough. And so do potential investors. The people we are trying to convince and attract. They are leaving their FIAT truck at the door because they see “USDC”.

Circumstantial evidence of this ‘FRAX is centralized meme’:

My conclusion is that we have to bend the knee if we still want to keep our legs intact in the long run. Remember, we are all in this together against banks that are open between 09:00am and 09:01am only on the first Thursday after the Munger blood transfusion.

This seems like an abominable ouroboros mechanism. We’re emitting FRAX by using FXS as collateral? What? Well, first of all, FXS is its own beast. Right now a lot of FXS value is “wasted” idling because the FXS market cap is much larger than (1-CR)*FRAX_mkt_cap. If there’s no lending partners willing to emit FRAX/STABLES with FXS, why shouldn’t the protocol itself do this?

This way we also sort of solve the problem that this AMO would be short circuiting the FXS-Utility mechanism.

This way we’d be like a MakerDAO++. While a user PAYS Maker to borrow DAI (stability fee), a FRAX_BORROWLEND_AMO user wouldn’t incur this fee.

The malfunctioning of this AMO would jeopardize the protocol depending on how much FRAX is issued by it. Aberrant liquidations caused by malfunctioning oracles which happened on Black Thursday to MAKER are one example.

I know Sam is irked by the fact this is even an issue, considering the protocol’s decentralizing itself by the minute anyway. However not everybody can see the potential long term. People want their candy right NOW.

I want to note that while there may be some sarcastic tones in this post, it is not intended to dismiss decentralization. It’s something I think everybody who is part of the crypto community yearns (p.unintended). I don’t want to pretend I know Sam’s thoughts, but it seems like it’s definitely on his mind and that he is on the same page with all of us. We all think Ether is awesome, Ethereum is awesome, and our homebase! The jokes are more directed to people who think this is such an easy problem to fix and that FRAX is a FARX for not doing its part. They think we will FEIL as a centralized project. But I am an Etherean as well, yet I see the potential of this protocol. Please reply so all of us can Gauge where the rest of the community resides on the Curve ;)!