Governance power in other protocols phase 2

PHASE 1 , this part has already been voted for and passed, scroll down for PHASE 2

As the FRAX protocol expands we have and will continue to collect more governance tokens in other protocols.

This gives us as a collective a lot of voting power in other protocols, but the problem is how we use it.

In the last TOKE reactor voting round we put up a rushed vote in our governance to vote if we should use our TOKE voting power to help vote in another protocol, and we also missed a few votes on OHM that could have earned the FRAX protocol a healthy amount of airdrop tokens.

Sam has mentioned that some sort of team should be set up to help control the voting power we have, im not sure who will be in that team, when or how it will be set up but i would like to propose the following as a temporary solution until a permanent solution can be found.

We give the FRAX team members permission to use the governance tokens we hold as a collective to vote in the governance of other protocols on our behalf with the following conditions.

1, we are informed every time the team votes (a simple post in telegram will do)
2, voting power should only be used if it is in the general interest of the FRAX protocol.

This would allow the team to vote on any proposal in other protocols in a timely way and anyone can bring a proposal vote to their attention knowing the team will review the proposal and vote accordingly on our behalf.

well this adds to the confusion a bit, here is a reply from Sam when i mentioned a VOTE on the TOKE protocol, where he clearly states a vote is needed on FRAX to confirm that investors are happy for FRAX to us its voting power.

but here is a reply from Sam when i mention the vote on OHM , to buy FXS on the open market, where there is no mention of having a vote on FRAX. this implies that the team are happy to vote on things without a FRAX governance vote. and imo this is the way forward until a better solution can be found. 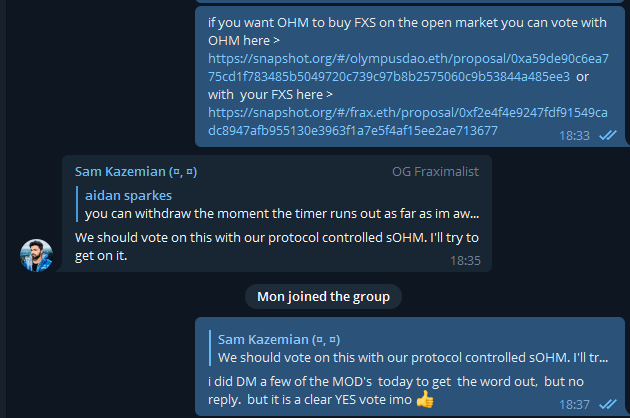 maybe the team can give some clarity about this.

Agree, give the team the power to vote on the protocols behalf until we settle on a more decentralized long term solution

Ok, so the voting is complete and we agreed to let the team use the governance power on our behalf. Now its time to address the issue of making this more decentralized. To do this i would like to propose the following.

Right now we have a group of people controlling the governance power FRAX holds , lets call this group the “FRAX committee”. Right now all the roles in the FRAX committee are held by team members, as we just voted for them to have the voting power.

I propose we have a round of voting to add 1 person to the FRAX committee thats not a team member, we can make a thread for interested investors to express their interest in taking on the role and make their case for being voted in to the FRAX committee. Once some time has passed we could then list all the interested parties in a vote and the FXS holders can vote in the person they wish to be added to the committee.

Every few months we can repeat the process and vote in another member until we reach the ideal number of people to run the FRAX committee.

Once we reach the ideal number we could carry on voting people in but as new people join a FRAX team member steps down from the role (the FRAX team can choose who steps down).

We then carry on voting people in until there is 1 FRAX team member left and the FRAX committee is made up of 1 team member and the people voted in.

To do this we would need to agree on the ideal number of people to have on the committee, personally i think 7 people is ideal to start with, but we may need to increase this as we gain more voting power in a wider selection of protocols. This number can be increased at a later date if needed but i feel 7 is a good starting place.

We should agree on some basic’s for all people applying for the positions.

As before, any time the FRAX committee votes on a proposal it should be posted to the community and should be in the interest of FRAX.

If this part of the governance proposal is voted in i foresee it taking 18-24 months to play out as we have a vote every few months. The reason for this sort of time frame is stability , having a slow and steady hand over of power is much better then just changing everything in a few weeks.

Good suggestion on having a dedicated voting team; I like this, but agree an interim solution would be helpful.

On the notion of a message in Telegram, it can be hard for many people to follow along. I’d suggest that Frax either uses their Twitter feed or establishes a new gov type feed for these items. It’s easy to turn on alerts on Twitter, and I use this for some of the protocols I follow, which is very helpful.

Fantastic suggestion on the way to slowly decentralize and agree with the basic outline for the profile of each of the applicants. Am all for this.

i agree that setting up a way to report what votes have been voted on and how the FRAX committee voted.

as we start taking on voting power in more protocols this will be needed more and maybe setting up a fresh telegram / twitter / discord feed would help with this.

Just to re-cast my vote, I think a Twitter channel is ideal as one can just turn on alerts; Discord and Telegram can easily be muddied by too many new messages across channels.

we dont have to choose 1 option, posts can be made in any number of places.