Stop selling the CRV, stkAAVE, COMP and cvxCRV the protocol earns from its AMOs and usd investments.

Accruing these assets to participate in the governance of those protocols to increase their FRAX usage is more beneficial than what is earned by selling them.

Currently FRAX is earning a lot of tokens through its AMOs, specifically:

CVX is being locked as vlCVX, TRIBE is being staked on a FEI-TRIBE pool. Per FIP-14 25% of the CRV cvxCRV stkAAVE and COMP is being sold for ETH. I strongly disagree with the part of selling those tokens, because these protocols are the biggest of DeFi, and I think that the most beneficial alternative for the protocol would be to build strong partnerships with these protocols.

For example, borrowing RAI on AAVE is being rewarded with stkAAVE, but none for FRAX, more than 6.5 billion in usd stablecoins are being borrowed in COMP, but FRAX is not currently listed on COMP, the FRAX pool on FTM-Curve has 2k usd tvl. Those are very big potential expasion opportunities.

Speaking particularly of Curve, currently the CRV rewards for the Frax pool comes mainly from bribes (2.2M CVX votes), which is definitely a good strategy, but the rewards could be bigger if we used that CRV to increase the gauge weights instead of selling it. Frax has over 200M usd of protocol-owned liquidity in the Curve pool, which has come from the growth of the pool combined with the AMO, selling CRV has made us maybe 3M usd in ETH. If we use the CRV to increase the rewards we could potentially generate hundred of millions more in protocol-owned liquidity compared to selling it. For example, mUSD bribed which made them gain 1.5M votes in the gauge, since then, 15M mUSD have been minted and currently the curve pool has 63M locked with 35% in APR base CRV rewards. FRAX currently has ~200k of idle crv, 100k crv were sold today, and i’d guess earning more than 10k crv per day through the AMOs.

Coming back to the main point, although current farming rewards wouldn’t provide an instant voting advantage, i think it is a necessary first step if we plan to become ingrained on those protocols and by consequence in DeFi.

Summing up, I think and propose that we should stop selling these assets at least until we have a proper discussion of how we’d like FRAX to participate in the governance of other protocols.

this would mean we no longer add funds to the ETH AMO ?

should we also look at exiting the ETH AMO?

FRAX still has other revenue sources which potentially can be used to continue buying ETH. I’m just proposing to stop selling until we have a better idea of what would be the best strategy. If we discover in the future that holding CRV is better than selling it, it probably would cost us more to rebuy the sold CRV, if we find that it is better to sell it, then we can continue dumping our stash. I’d be happy to help analyze this situation, but for approximately the following 2 weeks i can’t, after that i’m happy to keep looking into it.

CRV is most useful for voting for the gauges and boosting farming, the gauge voting is very useful, the boosting is currently not useful, because you get a higher APY farming via Convex.

FRAX has tried to get whitelisted, but we failed. We could try again, but there are only tree contracts whitelisted, so it not easy.

So as it is, we do not have any use for CRV. We are hording CVX on the other hand and have a big vote for the gauges via Convex. At current prices you get more votes buying CVX than buying CRV. During the last vote, one CVX got you 9 veCRV votes and the CVX price is only 5x higher than CRV. So to maximize the gauge votes we should actually sell CRV for CVX. If at a later time we get whitelisted and it would be cheaper to lock CRV than vote via CXV we could decide to sell some CVX for CRV again to lock up.

Given the uncertainty of wether we would get whitelisted on Curve and that there probably aren’t many reasons why having veCRV would be better for us than having CVX, I think that selling the CRV and cvxCRV we earn for CVX would be a good idea

one thing i would like to say is that it does not need to be an “all or nothing” we could choose to change the amount we buy or sell , maybe change it from 25% to 12.5%.

I think we could make a FIP with three options

I personally would support the third option, I think that it would translate in much more minted FRAX from the Curve AMOs, which means more profit

I think that if we do this, we should begin soon, since CVX emission is declining rapidly and its price will probably continue rising 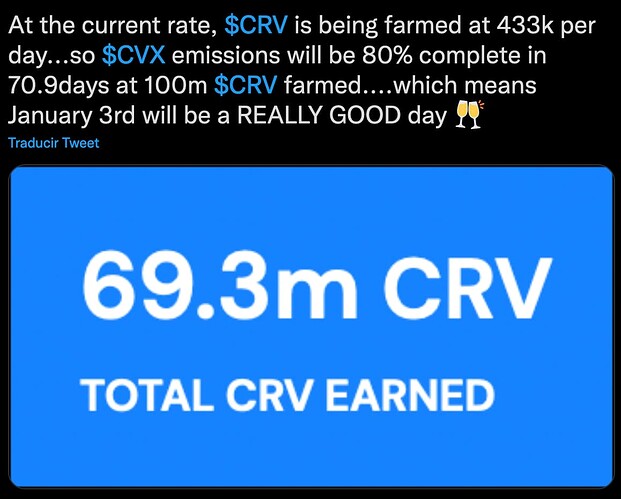 I really think we should let vefxs holder decide whit a gauge systems whit whitelisted tokens. That way we dont have evry week a vote for a change in the governance section

But I think protocol needs to swap those tokens to $ETH for future.

No, it is FXS holder’s rights, nothing to do with vefxs.