Cross Chain Routing Protocols - Multichain, Hop, Synapse - are an emerging class of DeFi protocols that are becoming increasingly important in the age of Alternate Layer 1s and Ethereum Layer 2s. Would a cross-chain Routing Protocol (CCRP) AMO, that deposits FRAX liquidity into CCRP pools be of interest to the FRAX community? The short reason for wanting a CCRP AMO is to make FRAX the most liquid asset for cross-chain swaps and to earn limited trading fees and LP rewards from the CCRPs.

What are Cross-Chain Routing Protocols (CCRPs)

Cross Chain Routing Protocols enable fast transfers between different networks, without needing to use native bridges or unlock mechanisms to move funds. A user withdrawing FRAX from Arbitrum → Ethereum Layer 1 can avoid the 7 day withdrawal period by transferring tokens with a tool like Multichain/Anyswap. Users of CCRPs pay a small premium/fee to achieve near-instant transfers between different networks. CCRPs rely on liquidity deposited on different networks to enable these transfers. An individual may LP an asset on a given network and in return, they receive a fraction of all transfers that utilize the liquidity pool as a fee. Multichain charges a 0.3% fee.
Users of CCRPs require sufficient liquidity for the assets they are looking to transfer. If an asset does not have enough liquidity on a given network, users cannot transfer to the network using the CCRP.
For any given asset, liquidity within a certain CCRP is often very fractured across different chains. For example, the most liquid asset on Multichain/Anyswap, USDC, has only $21,100 of liquidity on Polygon compared to $6M of liquidity on Eth L1 (at time of writing). This means any individual wishing to transfer more than $21,100 in USDC from any network to Polygon via Multichain/Anyswap will not be able to do so.

There are three primary Cross Chain Routing Protocols. Multichain has by far the most traction, however, Synapse is partnered with Olympus DAO.
View each protocols stats on Defi Llama:

At the time of writing there is $19M in FRAX deposited with Multichain/Anyswap, FRAX is not available on Synapse (maybe we should pursue getting it listed) 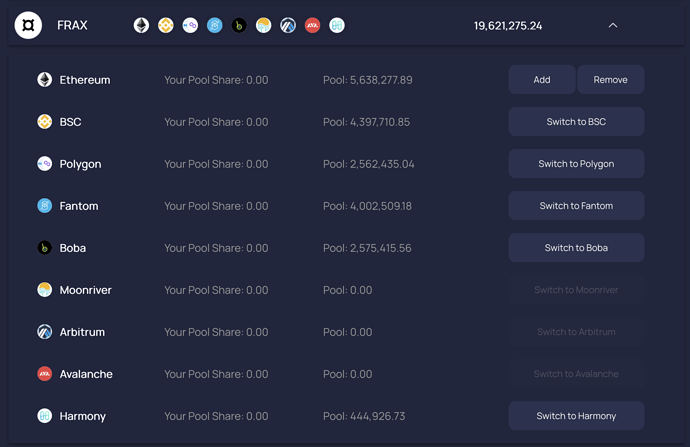 The available liquidity is quite limited on Moonriver, Arbitrum, and Avalanche. Notice that if a user wanted to make a stablecoin transfer between Arbitrum and Avalance (something I’ve tried to do and that is reasonable to avoid gas fees from Arbitrum → Ethereum → Avalanche bridging) it would not be possible to do so with FRAX, as there is no liquidity on the exit side.

Each CCRP makes different tradeoffs and design decisions when it comes to security and decentralization. Others may be better placed to comment on the specifics of each CCRP.
Anyswap/Multichain has been audited by Slow Mist, github link to audit.

Frax should deploy and manage FRAX liquidity in a select group of CCRPs across as many chains as possible. With sufficient liquidity deployed, FRAX can become known as the stablecoin with the best cross-chain liquidity. Ideally, frequent users of CCRPs will become accustomed to using FRAX as their stablecoin when performing cross-chain transfers.
USDC currently has ~$97M in liquidity provided to Anyswap. If there is interest in this kind of AMO, a reasonable medium-term target of $100M in CCRP FRAX liquidity might be a good start.
In my opinion, the use of CCRPs is likely to increase significantly as Optimistic Rollup based L2s continue to take off this year, rumour has it Arbitrum will be unlocking more throughput soon. Strong CCRP liquidity could be a driver of significant growth for FRAX.
There is a significant degree of technical challenge in actually executing this, as the nature of the AMO is cross-chain. I would very much like to hear the Frax community’s opinion.

The primary risk lies in protocol vulnerabilities and smart contract issues. Similar to Rari Fuse lending markets, where all AMO FRAX is over-collateralized by depositors, FRAX deposited in CCRP Liquidity Pools is never truly removed by users. If a user wishes to bridge X amount of FRAX from chain 1 → chain 2, the user is depositing X FRAX into the chain 1 LP and removing (X - fee) FRAX from the chain 2 LP. I believe this makes CCRP’s relatively safe, provided the protocol and smart contracts are sufficiently audited.

Interesting suggestion; thanks for sharing.

My big question regarding multi-chain probably relates to whether or not FRAX has any protocol partners on each individual chain. For instance, if we’re not active on Moonriver with XYZ as a base pair, then adding liquidity to a cross-chain router might not make sense.

Perhaps any cross-chain routing AMO would need to be paired with a program ensuring that there is adequate swap liquidity (FRAX:USDC for example) on each chain.

Or maybe I’m missing the value in providing cross-chain liquidity without having these pieces in place.