Remove D4 Saddle pool staking rewards and move it into the gauge system.

As pointed out by community members, the dynamic and constantly updating nature of rewards for gauges are far fairer than our staking rewards and in general, it seems a good practice to move staking rewards pools into gauges.

We would like to propose to start this good practice with the D4 Saddle pool, which means removing D4 Saddle pool staking rewards and adding it as a gauge. This essentially allows FXS emission to be used more fairly for the stability of FRAX as well as the extension of the market cap of that.

This is potentially an initial proposal to move all staking rewards to the gauge system.

This pool isn’t very useful - we should kill it outright and not move it to the gauges - it is always underweight FRAX because FEI and alUSD do not have strong pegs - for example at the moment it has $9mm FRAX liquidity and $20mm FEI liquidity Saddle.

It is better for us to have direct pools with partners where we can better manage risk and align incentives. Would it be possible to change vote to not move it to the gauges

I just added a new option based on your comment.

How much FXS are rewarded weekly to this pool now? 10k?

We dont use a tokens stability to judge if it is worthy of being in the gauge so i dont see how that matters. may other stables have a wider “peg” then we do and we cant hold them to our own standards when they are not built to hold peg in the same way.

Due to UST collapse , is it wise to move things about now or wait for things to settle? this pool has seen a 50% reduction in TLV in the last month as people exit their positions. so people are still reacting.

Right now the pool has $5m FRAX and $27m of other assets. i would see this as the others providing us more liquidity then we are providing them.

I also notice this pool is rewarded by all 4 protocols involved, and i would like to know if our rewards are on a par with the rewards from the other protocols? 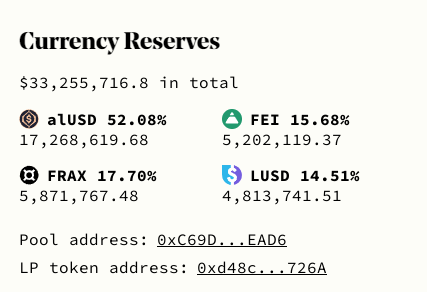 generally i would rather move pools to the gauge and let them compete for the rewards in the voting / bribes systems rather then just stop the rewards.

if the pool rewards were stopped then i think its fair that we let the time run down on the locked LP’s and just give investors 1 year notice (its a 1 year max lockup) , eg if we vote to end the rewards, the rewards will end 12 months after the vote ends and LP will remain locked until there time runs out.

i dont have the feeling the rewards are on par at all, also because staking the lp on frax only boosts $fxs. i did some quick googling but could only find these resources:

none of these mention any hard numbers when it comes to the rewards.

in dollar values the reward balances there are currently distributed as such: