Use the “Project Treasury / Grants / partnerships / Security-Bug-Bounties” veFXS balance to farm incoming bribes and fund an airdrop for veFXS holders.

When FRAX launched it allocated 5% of the FXS supply to the “Project Treasury / Grants / partnerships / Security-Bug-Bounties” fund.

Generally speaking this FXS remains locked in veFXS, only being removed once a month so a small amount of FXS can be removed to fund a selection of our monthly costs.

We currently have just over 4.1m FXS locked in veFXS and it can be tracked here.

The Contract Address 0x9aa7db8e488ee3ffcc9cdfd4f2eaecc8abedcb48 page allows users to view the source code, transactions, balances, and analytics for the contract address. Users can also interact and make transactions to the contract directly on...

The fund is being used to fund the projects needs but 99% of the time is just sitting in veFXS staking collecting a small amount of rewards.

The 4.1m veFXS is offering us little to no value and can be used in a more capital efficient way while still fulfilling its role of funding grants, partnerships and security.

Right now 4.1m veFXS controls around 4.2% of the weekly gauge emissions if all veFXS voters vote.

We allow the team to use these veFXS to vote on the FRAX gauge when they can earn bribes for there voting power.

We use the veFXS to collect bribes until we have collected $25m in total value or the veFXS amount in the wallet drops below 500k.

We then use this $25m to fund an airdrop to veFXS holders.

I’d support this. Seems like a good way to get people to stake vefxs on top of the APR.

1 advantage to this is for all the small investors that cant afford the GAS fees involved with voting and claiming bribes can now pay 1 fee to claim an airdrop. This meas even the smaller investors can still get all the benefits of being a veFXS investor.

Another advantage is for protocols posting the bribes as they will know that at least 1 veFXS investor of size would be willing to use its voting power just for earning bribes and they will not need to convince voters to switch their voting power to vote for a pool that they may not be staked in.

What is the reason you want it to be an airdrop instead of going to veFXS as yield?

The last time veFXS holders had an airdrop it attracted lots of new investment in to veFXS and cvxFXS and helped us onboard many new people.

Due to the way the veFXS system is built it rewards long term investors with a bigger slice of the drop, meaning a big portion of the new investors locked for a long time or locked via 3rd party protocols that perma lock the funds.

I foresee any future airdrops to have the same effect. 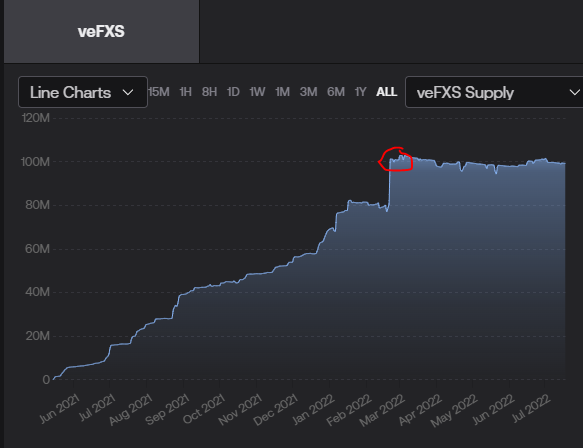 Without checking my wallet for the date of the airdrop i would assume it happened around the time the fresh investment in to veFXS stopped, as you can see on the graph.

Having more airdrops gives other protocols the chance to do what convex has done, this will help us spread out the voting for our governance.