You may be aware of ANGLE protocol as its euro pegged stable coin agEUR is in one of our gauge pairs.

But if you are not aware of ANGLE Protocol , its a new DeFI stable coin protocol thats slowly building up its reserves and services.

You can find its app here > 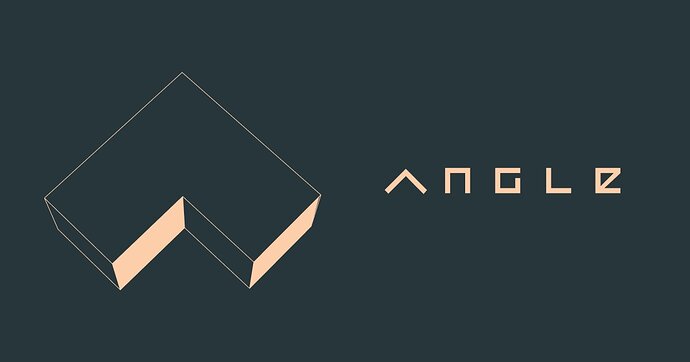 The first ever capital-efficient, decentralized and over-collateralized stablecoin protocol

And its docs here >

Angle is a decentralized, capital efficient and over-collateralized stablecoin protocol.

ANGLE has selected FRAX as an asset used to back its own stable coin.

But there is an issue, due to the small amount of FRAX thats been used to mint agEUR the ANGLE Protocol has had to limit or stop some of the margin trade options it provides to FRAX holders.

The services are still open to investors that hold stable coins that are not FRAX, so this is not a good look for us.

This is an issue the FRAX protocol could fix.

i propose we use $1m of FRAX to mint agEUR, and stake the agEUR on ANGLE Protocol.

Going forward we should add more funds as and when needed up to total of $10m FRAX.

If we reach the level of $10m then we should review the issue and choose how to go forward from there.

seems solid project and their perpetuals are as well intriguing
in discord their team seems hands on
at the moment users are able to open DAI, USDC and FEi only cause not enough FRAX minted
i fully support staking, investing or considering opening even perpetual there

i would mint even more because 1m FRAX can be used in perpetual with leverage 5x, 10x or more.
i would propose that frax AMO invests additional 30% FRAX of that mint amount by themselves to perpetual and rest to agEUR staking

the proposal is to use up to $10m FRAX to mint new agEUR.

we may need more at some point and we can review that at a later date, but for now i think this is a good starting point.

as well i would propose to give in FRAX/ agEUR pool besides FXS rewards ANGLE tokens not FRAX and agEUR additionally. maybe Angle team agrees to join?

Sounds like a solid play. Thank you for identifying this opportunity sir.

i should point out the rewards FRAX will get for staking its agEUR will be paid in ANGLE token.

ANGLE token is a bit like FXS token, so it comes with some voting power and the power to boost LP rewards.

so once these rewards start to build up FRAX could vote to increase the rewards paid to pools related to FRAX stablecoin. like we do in other protocols.

I’m not opposed to this proposal but the way that it is worded is a bit odd to say there is a “FRAX shortage.” Why is there a FRAX shortage exactly? Shouldn’t the Angle protocol target a reward rate of ANGLE tokens it wants in order to get FRAX deposits? I’m not familiar with the intricate details but I think it seems like it is not really FRAX protocol’s responsibility to alleviate a shortage of collateral for Angle, am I wrong?

The ANGLE protocol treasury assets have a limited amount of FRAX because people are not minting agEUR with their FRAX.

ANGLE Protocol does not incentivize people to mint agEUR with any of the stable coin options but people are choosing to use USDC ($206m) and DAI ($28m) over FRAX ($1.9m).

The limited amount of FRAX in the ANGLE treasury is not our problem to solve, but it is a problem we can solve and it will also help the FRAX protocol at the same time.

From the FRAX point of view it will do the following.

1, increase the adoption / use cases for FRAX
2, generate an income for the FRAX protocol (from staking the agEUR)
3, FRAX will slowly start collecting $ANGLE which is used for voting power in the ANGLE protocol and can be used for gauge weight voting (when the update happens later this month)

i see this a way forward for FRAX when working with new (much smaller) protocols. we help them grow by providing liquidity and in return we earn governance tokens which we can then use to vote for FRAX pools on their platform. Over time this should attract more investors to the new protocols and give them a reason to use FRAX over the other stable coin options, and this should lead to an increase in usage for both FRAX and the new protocols.

i cant really work out a good way to know when we should increase from $1m up to $10m , so im just gonna do a vote for $5m and leave it at that, we can always increase or reduce it later.

But there is an issue, due to the small amount of FRAX thats been used to mint agEUR the ANGLE Protocol has had to limit or stop some of the margin trade options it provides to FRAX holders.

The services are still open to investors that hold stable coins that are not FRAX, so this is not a good look for us.

I do not get this, if there is demand for margin trading using FRAX and they do not have enough FRAX, why do they not swap some USD(C/T/?) to FRAX? That seems to be the easiest solution I would think.

that would solve that issue, but it would not result in FRAX gaining governance tokens or FRAX investors getting boosted APR’s.

this is the first times a protocol has tried to use FRAX as collateral for its token rather then just a way to get liquidity and i think this is the way forward and should be supported.

i have pulled the governance vote because ANGLE are going to remove the single coin staking option for agEUR, so it kinda make it a void vote now.

In this proposal, there is a small problem for FRAX - dependence on the euro exchange rate. But this is easy to solve:

P.S I think that ANGLE farming is fixed for each currency, which means that when opening a perpetual futures, we will reduce the yield by 1/3 or to 350%