We have already discussed with the Frax team about the possible collaboration and seed funding support from the Frax Team. We are here to propose collaboration in detail to the Frax community for further discussion and voting!

The Hayek Protocol is named after the Austrian economist Friedrich Hayek who is best known for his defense of classical liberalism and won the 1974 Nobel Memorial Prize in Economics. Hayek’s stance makes him a godfather of the largest cryptocurrency. The European Central Bank even stated that “the roots of Bitcoin can be found in the Austrian school of economics,” of which he was a leading voice. Here in Hayek Tech, it is the world’s fractional-algorithmic stablecoin protocol. The governance token of Hayek, HAS participates in the process of stablecoin minting. And all of stablecoins corresponding to every country’s currency are able to be minted based on a common model.

Hayek is a new paradigm in global stablecoin protocol design. It brings together the implementation of Frax Fractional Stable Token design mechanisms into a protocol for all Hayek stablecoins:

Our goal is to build the financial infrastructure available for normal web2 users to migrate to Web3 and essentially provide them products like forex change to achieve more advanced and diverse financial activities. 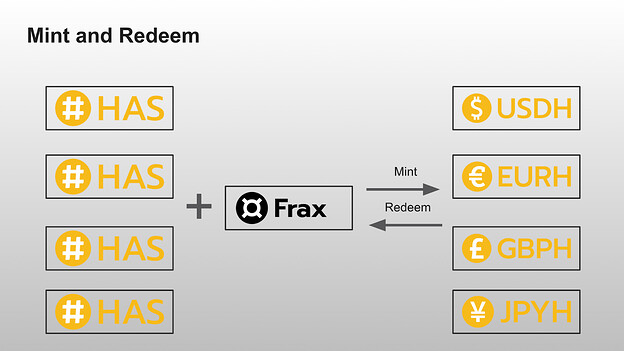 Hayek invites FRAX to participate in the Hayek.Technology’s seed round as a protocol DAO. Hayek’s governance token HAS will list on the bellowing exchanges in May or later in 2022: MEXC, BitMart, LBank, Hoo, Hotcoin, AAX

By holding HAS, HAS will later be able to stake as veHas for Hayek governance voting and earn more HAS distributions.

Hayek will also create a FRAX<>USDH, FRAX<>EURH, and other liquidity pairs and intend to apply for an FXS gauge in the future. We would love to spread the adoption of FRAX tokens in the Defi market instead of centralized tokens such as USDT or USDC to help bring more decentralization to the industry.

We are also interested in 4pool pair, which we will make another proposal later.

Raising at a $60mm FDV is very rich in this macro environment - especially considering the asks you are putting forward (from what I can divine) above. If Frax is to take the liquidity risk of $7.6mm and give you an extra $1mm only to end up with 1.6% of the token supply - it seems like a fairly bad deal. This seems similar in terms to the asks that Volt protocol are making of Fei/Rari - but in that case Fei/Rari are ending up with 30% of the protocol governance token and not 1.6% (see FIP-88: VOLT joins the TRIBE - Proposals - Tribe)

Could you also let us know what the vesting schedules are for the relevant groups discussed in the token distribution document? Hayek Token Matrix. There will be 200,000,000 HAS tokens… | by Hayek Technology | Apr, 2022 | Medium

so generally speaking you propose FRAX puts up

have i got that right?

By holding HAS, HAS will later be able to stake as veHas for Hayek governance voting and earn more HAS distributions.

is there rewards for providing liquidity from the start or only after veHAS has been introduced?

if there is liquidity provider rewards will they be higher at the start to balance the risk / reward of early providers?

if 30% of our HAS is locked in vesting does that mean it cant be locked in veHAS when veHAS launches?

can you link your whitepaper and any websites ect please.

I think we should clarify that we are actually not on the seed funding stage, it is not very accurate to describe our current status.

We have already very close to launch our product by the end of May, most of the prototyping is finished, and the testnet version will be soon out in a week. And if you check the proposal you mentioned, 30% allocation is not entirely for one protocol, its a total fund raising allocation. Regarding of that part we are also constantly in talk with other VCs as well as Exchanges for IEO. We have already secured Bitmart, BitMart, LBank, Hoo, and Hotcoin.

Regarding of the vesting schedule.
For the community, the release plan for now is with varieties of yeild farming products, we will gradually reward our users using veHAS gauge system in 3 years.
For Team is 36 months linear distribution.
Investors is all 1 year lock, and 2-year vesting schedule with linearly quartery release.

so generally speaking you propose FRAX puts up

have i got that right?

Thank you for your question.

Actually we are asking Frax to invest $1M at $0.30 to purchase 3.33M HAS, and use a portion of the investment to mint our Hayek Stablecoins. We assume the price of the HAS token will be $0.40 dollars when minting, therefore the value we ask for minting is $3.6M Frax + $400K HAS, and the $400K HAS comes from the investment of HAS token from the $1M investment.

So to clarify, The Bold Italic values are what we are proposing to Frax for supporting:

Therefore, total proposal value: $1M for investment + $7.6M for minting & liquidity mining.
Reward for Frax = 3.33M HAS, 30% of the HAS which is 1M HAS will be used for Minting the tokens, which is mentioned in the above $400K part. We are assuming these 1M HAS token will worth $400K, and these tokens will be locked for 1 year. then the remaining 70% of the HAS tokens will be distributed to FRAX based on linearly quarterly release.

is there rewards for providing liquidity from the start or only after veHAS has been introduced?

veHAS will be introduced at the launch of our project.

if there is liquidity provider rewards will they be higher at the start to balance the risk / reward of early providers?

yes, the major strategy of develop a stablecoin protocol is composed of providing high incentives as well as various use case of the stablecoin.

if 30% of our HAS is locked in vesting does that mean it cant be locked in veHAS when veHAS launches?

this 30% is used to mint the Hayke Stablecoins in the minting part of the proposal mentioned.

can you link your whitepaper and any websites ect please.

Thanks for the reply @hayek-tech - but this isn’t right

. And if you check the proposal you mentioned, 30% allocation is not entirely for one protocol, its a total fund raising allocation.

The type of support you are requesting is very similar in kind but Frax would end up with 1.6% not 24%. I am not suggesting that you should match what Volt is doing for Tribe DAO, but your offer is for us to take a massive risk with significant protocol funds for the “opportunity” to buy 1.6% of HAS at a $60mm FDV. That valuation is over the top in this current market. For example Fiat DAO who have a post launch working product are trading at $50mm FDV - MStable who have been developing their platform for years are at a $60mm FDV - Inverse Finance who have been operating a stablecoin for over a year have a partnership with Yearn and are trading at $20mm FDV.

There is a not insignificant chance that the HAS token will trade at less than $60mm FDV. In that circumstance we will have put material amounts of protocol funds at risk - be worse off than if we had just market bought HAS at launch and then be in a situation where we can’t even yield farm with our HAS token because the vast majority of it is locked up for over a year.

I think you really need to reconsider the FDV basis of the HAS token offer to Frax - as it seems to me we will be the entity taking most risk for the launch of this product with the worst terms and significant risk that we may lose money if the public sale does not exceed $60mm FDV (which in this market is a real risk).

Thanks for the detailed reply @Mark11 , it has cleared out my misunderstandings of the volt protocol, and I believe you have a point.

From this minting support, we will get:

Let us know what you think,
Cheers