Grant $60,000 of FXS and FRAX (split 50/50) for a 6 month period in order to fund Flywheel which will continue its efforts producing content covering the Frax ecosystem. In addition, we intend to continue to host meetups IRL as well under the “Fraximalist” Brand. In return, we will have FRAX sponsor our long-form content and advertise primitives such as Fraxswap, Fraxlend, FPI, and FrxETH.

Over the past 3 months, Flywheel has made incredible strides for producing content for the Frax ecosystem and has been able to expand Frax’s media footprint online, executing on its goals laid out in the original Podcast & Media grant of taking control of its own narrative as well as educating the wider community. 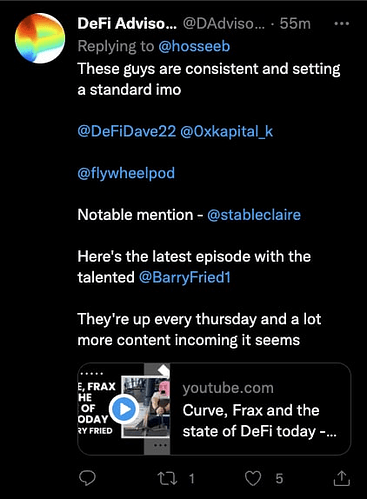 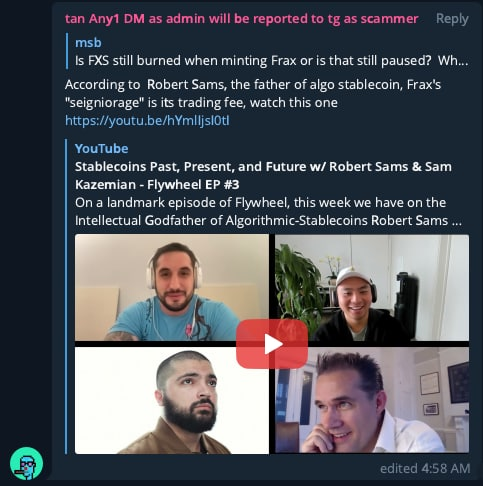 Since Flywheel launched 3 months ago we have:

These numbers show the incredible traction that Flywheel has received. The response to Flywheel has been overwhelmingly positive by both people in and outside the Frax community who are hungry for quality content. This is important because there is noticeably a media vacuum in crypto that has not kept up with the sheer speed of segmentation happening in Web3 as a whole. Flywheel is carving out its corner of the media space through covering and making sense of the Frax ecosystem through interviews, commentary, and explainers.

In the future, we want to continue producing Flywheel content and will use these funds to cover expenses and labor hours spent prepping, recording, editing, and distributing content. You can keep up with Flywheel on Twitter, Telegram, YouTube, Spotify, and Apple. Specifically, this grant will help fund:

The people who are leading this initiative include:

In the previous three months, expenses have primarily incurred from production of Flywheel. For those who are curious of how the Treasury has been utilized, you can see a breakdown of it here. It is important to note that DeFi Dave and kapital_k have not taken any compensation for their efforts choosing instead to reinvest in building up Flywheel. In addition, PIF Labs has been aiding in commissioning the institutional-level writing content for Flywheel. 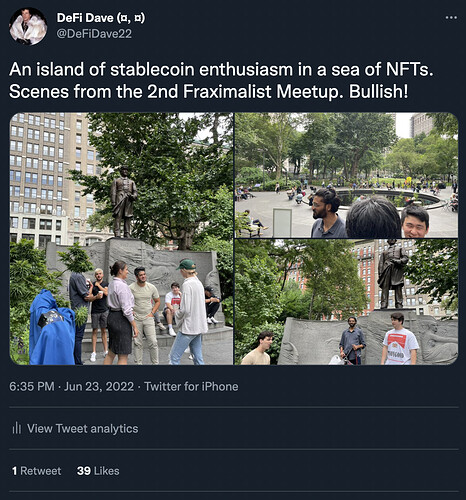 Fraximalist meetups are IRL gatherings of enthusiasts and curious alike and so far, three of them have taken place in Amsterdam (during Devconnect), New York (during NFT NYC), and (Paris during EthCC). The latest one in Paris attracted nearly 30 attendees who listened to DeFi Dave’s speech as well as stuck around for a merch giveaway.

In the future, Fraximalist meetups can host panels, discussions, and bring together thinkers & active players alike from across DeFi. Several conferences that Fraximalists meetups can take place at in the near future include:

The goals of curating events are to create a sense of community, cultivate substantive discussion, and represent the protocol IRL. As part of Flywheel’s outreach efforts on behalf of Frax, organizing these meetups is an essential component of the marketing stack to increase awareness of Frax.

Funds from this grant will help cover the costs associated with hosting events including securing physical locations, setting up props, having food/water/amenities, as well as labor hours setting up and executing events.

DeFi Dave has been and will continue to lead the Fraximalist meetup series. 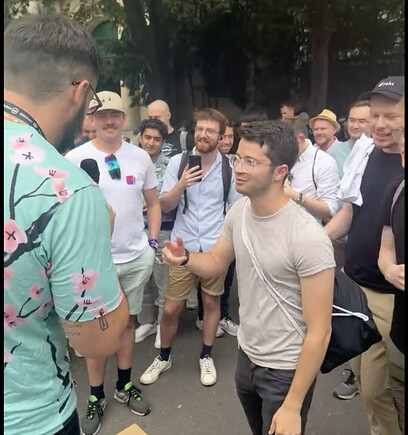 Flywheel aims to be the “Bankless of Frax” and take the wheel in driving both Frax’s and the automated stablecoin narrative forward. There is simply just too much at stake to do nothing and merely “hope for the best”, we need to keep actively engaging the wider DeFi community and beyond in order to inform, educate, and entertain them about Frax and its surrounding ecosystem. We strongly believe that Frax will reach Ethereum-level in size and along the way, Frax can not only scale technologically on-chain, but must scale socially off-chain as well.

Flywheel has done an excellent job representing Frax so far and we are here to keep pushing the momentum forward. As mentioned in the last proposal, the Frax ecosystem is growing to become much bigger than the core team alone and numerous contributors and commentators have arisen that have helped advance the protocol. Flywheel is here to organize and shine a light on Frax, carrying the Fraximalist torch up high for those who seek it.

I am a big fan of your work with this but this really needs accountability if it is effectively going to be our outsourced marketing arm.

Items funded in OIP-80 weren’t delivered, the proposal was very ambitious so that is understandable.

Flywheel as a product is good but the issue is the major value to Frax was the low hanging fruit of having Sam and other devs on - the value to the protocol diminishes as we get further away from the core of Frax. This almost becomes necessitated if it is to be a very frequent podcast - as it has been to date. The advertisement of products specifically is a good measure to ameliorate this having Frax as more of a sponsor - but this means there must be deliverables.

If we are sponsoring episodes of a independent podcast that will accrue value to the creators (which is the optimal course) - then it really needs to be clearly set out what is being delivered and what we are supporting with this proposal.

I recommend that you aim for per item sponsorship so if things aren’t delivered then the protocol won’t need to pay sponsorship for them for e.g:

This could well end up being greater than the proposed amount of $60,000 over 6 months but would mean that the protocol is only supporting things that are delivered.

In the per item sponsorship model, We can have some extra meta matrics for incentives as well, like:

Thank you for your response. And I agree with you that accountability is of upmost importance when it comes to proposals like this (hence the transparency in financials). For context of how I arrived $60k ($10k a month), I compared it to other grants such as Bankless’ which currently received a $45k grant ($15k a month) from Uniswap Grants. From their most recent podcasts, it does not look like they advertised for them. That being said, I am happy to break down what is appropriate.

Core Team Content
For the next 6 months of Flywheel, we plan to consistently output two forms of long-form content.

As the proposal currently stands, if we release 2 episodes a week for 26 weeks straight. that’s 52 episodes a week. If you divide that by $60k that is a little over $1150 per episode. If Flywheel continues at its current pace of its first grant, by the end of the 3 months we would release 15 pieces of long-form content which is $1200 per episode. For a revised proposal, we can set a rate per podcast

Contracted Content
In terms of budget for other items such as Flywheel Output and StableClaire, I have come to different arrangements with outside parties. For example, some content is at a per hourly rate and varies while others have a monthly retainer. If I had to estimate the budget I’d need for each for the next 6 months, I would say I’d need $2000 for StableClaire and $15k for Flywheel Output. As mentioned in the previous post, PIF Labs the costs in the past but it is my goal to get Flyhweel on a path to sustainability.

Fraximalist Meetups
The budget allocated here depends on what kind of events we want to throw. If it’s meetups at bars that could run us several thousands dollars per meetup. In the past four months, we have hosted three meetups all with great success and little/no budget. If we throw four events the next six months with an average budget of $2500, that is $10k total.

Extra Incentives
I think KPIs are an excellent way to incentivize Flywheel. A few off the top of my head we can include are:

Conclusion
With the impact that Flywheel has had evangelizing Frax, I don’t think there is a single soul out there that can argue that we haven’t been effective. In fact, Frax is getting an incredible bang for its buck while spending substantially less that other protocols who have fully staffed internal marketing/BD departments.

In an edited proposal, I can clearly earmark each one of these items and come up with a new total cost and deliverables.

Here is the final breakdown of the sponsorship/grant as follows:

This proposal is up for voting here: Snapshot

Also I want to make clear here that the $60k will be streamed over the course of 6 months via llama pay or a similar service. That includes $30K of $FRAX and $30k worth of $FXS at the time the streaming starts.