Add a Mycelium fsMLP gauge to the gauge controller

Mycelium is building a DeFi infrastructure layer that powers a variety of primitives. Established in 2019 as Chainlink Node Operator, the Mycelium team has years of experience and over the past year has been actively contributing to Tracer DAO as a service provider. This past month, a proposal was posted in Tracer DAO’s forum to expand Tracer’s current product offering under the consolidated Mycelium brand which will include a Perpetual Swap and Spot Market on Arbitrum. Similar to its counterparts, Mycelium’s Perpetual Swap market and its corresponding Spot market will have an MLP token consisting of a range of assets which includes FRAX and FXS. Users can stake MLP for fsMLP (fee+staked MLP) in order to earn real yield from exchange activity.

The DeFi ecosystem on rollups is still in its nascent phases in TVL, giving FRAX ample opportunity to become the de-facto stablecoin in these arenas. What Tether is to centralized exchanges and what USDC is to mainnet, FRAX must be to rollups. In order for that to happen, we must continue to have our “positive-sum” mindset and work with trusted, established partners such as Mycelium. Tracer DAO has had a relationship with Frax in the past that allowed for certain perpetual pools to be settled in FRAX.

The Mycelium team has expressed interest in expanding FRAX’s portion of the MLP pool as well as creating more perpetual pools denominated in FRAX, increasing FRAX’s utility on Arbitrum. Furthermore, deep liquidity in MLP will allow for yield strategists such as Umami to build strategies on top of MLP that can be denominated in FRAX.

For: Deploy fsMLP gauge to the gauge controller

Hey Frax community,
Core contributor to Mycelium. Appreciate the consideration to add a gauge to support liquidity of FRAX and FXS within the Mycelium Perpetual Swap product. Happy to answer any questions.

Currently the weight for FRAX in MLP is just 1%. So now a gauge for fsMLP will not be very efficient in increasing FRAX usage. Is there a way to make the gauge work more targeted instead of sponsoring the whole pool?

Yes I’d like to see Frax percentage bumped up to 10%.
Good opportunity for Frax to increase adoption and utiltiy, hope they take it up.

I think that is part of the proposal, they say expanding FRAX’s portion of the MLP pool.

Yea I agree with you here. The only way I see this gaining more support is if its bumped up higher to 10%. I think that would take us reaching out to the Mycelium community to see how they feel about this.

I’ve mentioned this to Dave but I’ll post here too.

I don’t really see the usefulness with giving fxs rewards to an entire pool that has such little frax. Even 10% seems low.

I would (like Dennis mentioned) like to see something specifically targeted at the usage of Frax. Maybe there’s something in their system we can directly target frax usage with?

One other idea could be like incentivizing Umami single side Frax vaults for whatever platform they can apply to (mycelium or gmx or whatever). In order for them to do this though the pools of those platforms need bigger frax allocations. But I would imagine these platforms would be up for increasing if we’re willing to help incentivize the usage of the frax in their systems.

Yes increase FRAX’s allocation would be part of this. With that, we would need support from FRAX to have the targeted allocation meet assets in the pool. Right now we are slightly exceeding the 1.00%. The other stables coins are also seeing very strong demand (screen shot below). Without editorialising, we would love to increase the allocation of FRAX relative to particular stables.

On the subject of allocations, FXS is lagging quite a bit. We have been putting in funds in the pool to allow people to utiliise it to go long FXS. Utlilisation has been pretty good (the snapshot in time below is the lowest I’ve seen in the past 36 hours since launch). Should we keep the allocation of 2% this high? we would love the MLP pool to be a good venue for trading FXS on Arbitrum but interested in the communities thoughts. 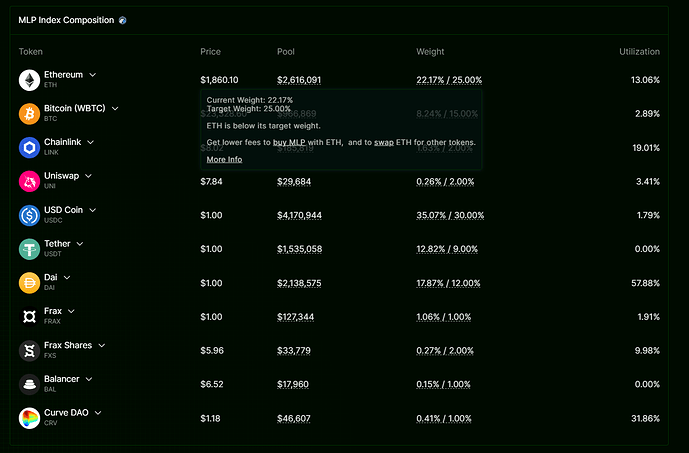 Yeah I think this makes sense. Linking this above reply as reference .

Creating an mlpFRAX vault that deposits FRAX into MLP and then uses Perp Pools with FRAX as collateral to manage the risk of non-stablecoins is a good outcome. Incentives can be directed there and achieve similar outcome that is positive sum.

There are other Frax specific things Mycelium can do, and support from Frax and its community is important to dedicate a large portion of MLP and pool assets.

Something that was mentioned in prior conversations to me was how the more assets there are in an LP, the more difficult it is to manage. I see that Tether’s allocation is 9%, its utilization is quite literally 0%.

Given the incentives Frax is willing to bring to the table, would it make sense to remove Tether’s allocation all together and give it to FRAX so it has comparative levels of allocation to DAI and USDC?

Here is something currently being voted on within Balancer to help provide support through their treasury allocating BAL. I understand that Frax has a very different way to manages assets within its ecosystem and is a completely different beast but this is a helpful step to gain adoption of BAL within our ecosystem while allowing BAL holders to continue to hold veBAL and use the perp swap as a hedging tool of BAL emissions and/or Spot trading through MLP.

There is about $8.5m of FRAX on arbitrum right now according to L2 Beat (I have no idea if this data is accurate). Assuming this data is accurate and getting to a similar level as DAI (saying 20% for both after jettisoning USDT - hypothetically) and with ~approximately $3.5m is held at Saddle and Curve as liquidity (might be reading this chart below incorrectly - so please correct me) so $5m of FRAX circulating supply on arbitrum would be remaining to meet MLP target allocation of 20%. At present TVL ($11.9m and hopefully growing), MLP would need $2.4m to meet the 20% target. That is basically half of unencumbered supply. The seems a bit aggressive. I know bridges are shutdown atm and Fraxswap can be used to bring more FRAX onto Arbitrum but are we being a bit aggressive in thinking getting those high of levels is appropriate.

I think we would like to be aggressive with the Frax community but need to understand how we safely reach the targets desired.

An additional point of interest here and something that would be good if Frax is interested is when deploying the Perp Pools using FRAX as collateral a Frax-controlled contract address could deploy the pools and receive 10% of the fees generated by the Pool.